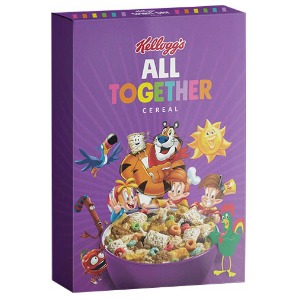 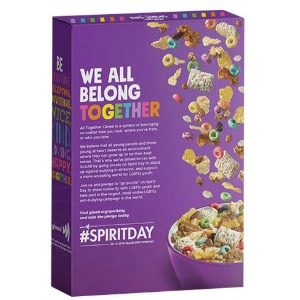 Kellogg’s US has released, in collaboration with GLAAD (Gay & Lesbian Alliance Against Defamation) a limited-edition cereal – Kellogg’s All Together – as a sign of support for the LGBTQ community.

Whilst not available in Australia, Kellogg’s All Together is on sale in the USA through kelloggstore.com – the box containing mini boxes of Kellogg’s favourites: Raisin Bran, Rice Krispies, Corn Flakes, Frosted Mini Wheats, Frosted Flakes and Froot Loops, allowing the purchaser to mix their favourite kinds of Kellogg’s cereals in one bowl.

Kellogg’s states on the All Together box:

“All Together Cereal is a symbol of belonging no matter how you look, where you’re from, or who you love.

We believe that all young people and those young at heart deserve an environment where they can grow up to be their best selves.  That’s why we’ve joined forces with GLAAD by going purple on Spirit Day to stand up against bullying in all forms, and support a more accepting world for LGBTQ youth.

Join us and pledge to ‘go purple’ on Spirit Day* to show solidarity with LGBTQ youth and take part in the largest, most visible LGBTQ anti-bullying campaign in the world.”

* Spirit Day (U.S.A.) was started in 2010 by a high school student in the USA in response to numerous young LGBTQ lives lost due to suicide and has now garnered the support of celebrities, faith institutions, national landmarks, corporations, media outlets, sports leagues, schools and advocates from around the world who join forces to stand against bullying and to support LGBTQ youth.