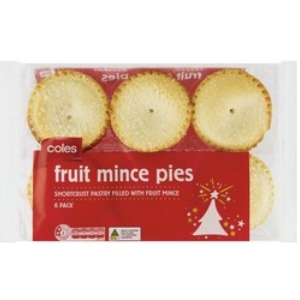 After having recently announced that it will sell Hot Cross Buns Year-Round, Coles has now announced that they are also releasing Fruit Mince Pies for sale from today (19th August 2019) in a 6-pack for ∼$2 from Coles Supermarkets nationally (image is an example only).

With twice as much fruit as last year and enclosed in a shortcrust pastry, Coles have advised these set to be the best fruit mince pies the supermarket has released yet!