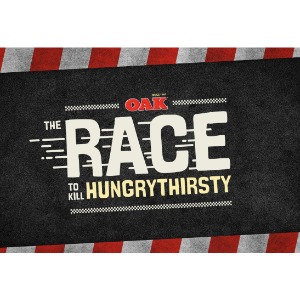 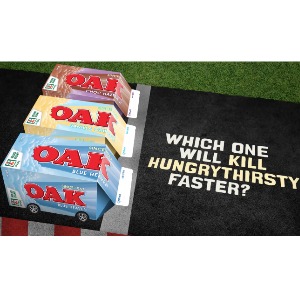 Everyone knows that only OAK kills Hungrythirsty dead… BUT which new flavour would do the job quicker?:

Giving power to the people, OAK is letting fans choose the next OAK 7-Eleven exclusive flavour by voting in ‘The Race to Kill Hungrythirsty’.

On Thursday 17 August at 4pm AEST, fans will be able to vote for the flavour they think will be the most effective Hungrythirsty killer, during a Facebook Live Video slot car race.

Each slot car will represent one of the three potential flavours (Choc Hazelnut, Blue Heaven and Vanilla Crumble), and be fuelled by a designated Facebook reaction. As more users engage with the Facebook reaction the cars will move around the track – only one flavour can be named the most effective Hungrythirsty killer.

Angela Burr, OAK Marketing Director, said: “OAK fans know great taste when it hits them, so we’re excited to give them the chance to make history and let them have a say in deciding what the next OAK 7-Eleven exclusive flavour will be.”

The winning flavour will be stocked exclusively at 7-Eleven stores around Australia from 3 October 2017.

To vote in the race of a lifetime, head to the OAK Facebook page and sign up to ‘The Race to Kill Hungrythirsty’ event page: Click here

It’s World Chocolate Day on 7 July, and Cadbury is celebrating!